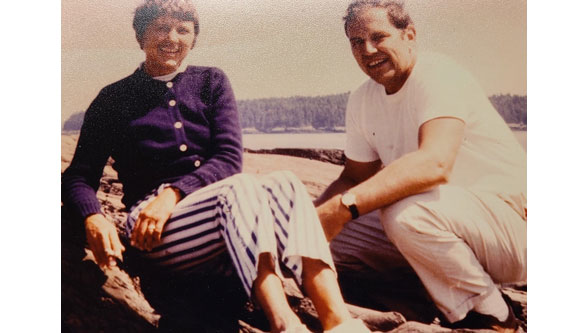 Betsey Means was in third grade when she walked by her parent’s bedroom and noticed the bed was in the middle of the room.

“It was pulled out away from the wall about four feet,” she recalls. “I asked my mother why it was there, and she said they were just rearranging the furniture.”

When Betsey checked later, the bed was back against the wall, and life went happily on for the Means family for many years. But Betsey never forgot that day in 1963 when the bed was in the middle of her parents’ big, beautiful room at the front of their house. The story about rearranging furniture never seemed right.

Years later as Betsey was packing for college, her mother told her what really had happened.

Before we go there, you need to know something about Betsey’s mother, Janet Means, and about Betsey herself. Janet (shown in the photo above with her husband, Richard) was a sensitive, someone who could see people from the other side. Betsey can do this too, occasionally. She describes it as picking up something like energy.

“The feeling is a tone. The vibration in the room changes,” she explains.

Back in 1963 when the Means family was new to their Lake Bluff home, Janet would wake up in the middle of the night feeling a cold energy in the bedroom. It happened frequently, and at first she thought there might be a draft, so she checked all the windows. She checked the door. Finding no source for the cold, she pulled the bed into the middle of the room hoping another angle would help her understand where the draft was coming from.

The cold energy did not go away.

A few weeks after they moved into the house, the previous owner called Janet to see how the family was getting on. Janet told her she loved everything about the Lake Bluff house except for the cold draft in the bedroom.

“You feel it too?” asked the previous owner.

“What do you mean?” answered Janet.

Now Janet and her husband Richard were sleeping in that room, with the cold energy that would not go away no matter how tightly closed the windows were or how many blankets the couple slept beneath.

One day Janet was cleaning out the front hall closet when she found a walking cane. As she reached out to pick it up, she sensed a connection between the cane and the bedroom’s cold energy.

As soon as she touched the cane, the cane pulled back.

Janet pulled it toward her, and the cane pulled back again.

Bestey says her mother knew what was going on and wasn’t the sort who would put up with any interference from the spirit world. She pulled the cane from the closet and walked it out the front door and down the driveway, then she threw it into the garbage can.

“This is my house now!” she announced, as she closed the lid.

And the cold energy? Betsey says it went away after that, except for one time many years later, when it again came through the master bedroom, waking Janet up until it passed by and out into the night.