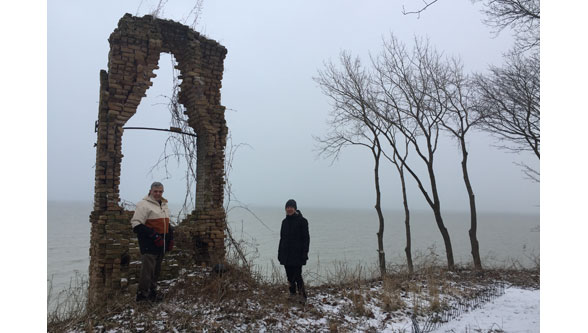 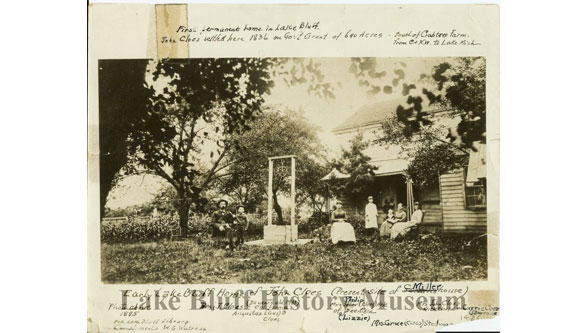 When you look out the picture windows in Neil Dahlmann’s living room you see what you’d expect to see at a lakefront home: trees, water, clouds, sky — plus something totally unexpected: the remains of a 125-year-old chimney that is literally teetering on the edge of the bluff.

“Someday it will tip over, and we’ll wake up and it won’t be here,” said Neil’s wife, Mary. (The couple is standing with the chimney in the photo above.)

The Dahlmanns live on Bluff Road on land that’s significant to Lake Bluff history: it was the first parcel claimed here after the 1833 treaty of Chicago opened the area to settlers, and only three homes have stood on the property in all this time.

In 1836, German emigrants John & Catherine Cloes arrived in Chicago and made their way north along the shoreline with their son Henry. The Cloes laid claim to 100 acres of land at $1.25 an acre, according to “100 Years of Lake Bluff History” by Elmer Vliet. They built a log cabin overlooking the bluff and near a ravine, and raised seven children in the homestead. Years later their younger son Ben Cloes wrote, “Other settlers chose the rich prairie farm lands, but father was drawn by the wilder beauty of the lake shore and wide outlook from the bluff.”

In 1895 the Cloes family sold seven acres of their lakefront property to newspaper publisher A.K. Stearns: he demolished the cabin and built a new house on the same spot. The 16-foot yellow-brick chimney was in the middle of the house, which was at least 75 feet from the bluff. (The bricks might have come from Mrs. Cloes’ brickyard, which was nearby on Birch Road, but the Dahlmanns don’t know for sure.)

Ben Cloes wrote that during the almost 60 years he was in Lake Bluff, from 1847 to 1905, approximately 50 feet of land washed away due to storms and high waves.

It also has been said that the construction of the harbor in 1910, at Naval Station Great Lakes about 1.5 miles to the north, changed the lake flow along the shore and increased erosion problems over time.

In 1948, after Stearns’ death, the home stood at the edge of the bluff. It was abandoned, and years later it was destroyed by fire. Well, almost destroyed: the brick chimney survived. Eventually an architect purchased the property and sub-divided it into two lots.

In 1965 Neil’s parents, Bernard and Eleanora Dahlmann, bought the north lot and built a mid-century modern-style house, with picture windows that afforded a clear view of the trees, sky, lake – and Stearns chimney. They loved it so much that Eleanora created a painting of the chimney on door panels in her kitchen so that she could still see a version of it when she closed the doors.

Neil and Mary inherited the house from his parents in 1995. They initially put the property on the market, but the more they came to check on the house, the more they liked it and Lake Bluff. They moved to Bluff Road in 1996, and did some renovations but maintained the prime view of the chimney, which was then quite near the bluff.

Today it is literally on the bluff’s edge, and there’s nothing the Dahlmanns can do but wait and see what happens to their piece of Lake Bluff history.