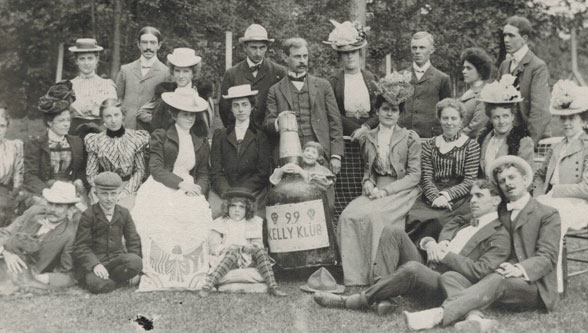 Solomon Thatcher described Lake Bluff as “a paradise” when he created a summer resort here in the 1870s, while the Hotel Irving promoted it as “healthful and refreshing” and prohibitionist Frances Willard called it “the chief rallying place of temperance leaders on the continent.”

Young adults had something else in mind. While others attended lectures at the Lake Bluff Camp Meeting Association’s tabernacle and Frances Willard and her followers met in guest-house parlors to discuss the vagaries of demon rum, young men and women held parties and went sparking.

First, let’s talk about the Kelly Klub, a spirited group of young summer residents and year-rounders in the 1890s. Will and Fred Waidner were prominent members with their sister Ella, who brought in Grace and Gus Cloes, grandchildren of Lake Bluff’s first settlers. Another regular was Franny Fowler, whose mother ran the Sheridan Inn.

The Kelly Klub provided entertainment for young people, including bicycling, tennis, bonfires and other pleasures and also enjoyed mocking the very serious prohibitionists urging people to abstain from alcohol. They planned escapades from the John Cole barn at 112 North Avenue and held parties on the beach and at the Waidner cottage at 345 Sylvan Road (long since converted to a year-round residence).

The Klub’s “Pink Rabbit Ball” was the pinnacle of summer, where young men sent anonymous invitations to young women who did not learn who invited them until the ball.

In 1894 Grace Cloes composed a poem with 37 stanzas about the club, including:

Verse 1: “The Kelly Klub is a jolly club
Composed of fresh young boys
Who happiest when with bass drum
They’re making lots of noise”

Verse 17: “They had a great many bonfires
In the evenings on the beach
They went down early and came up late
Which was the delight of each”

Verse 30 relates to an 1894 party: “The house was brilliantly lighted
But the grounds were secure and dark
And I tell you the cozy hammocks
Were excellent places to spark”

So…just what was sparking in 1890s Lake Bluff? We’ll leave that to your imagination 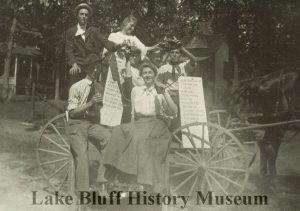