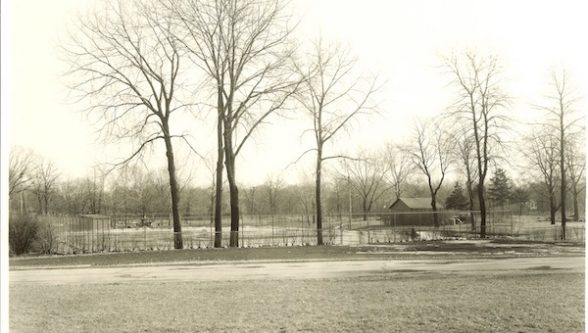 Do you ever wonder if the good deeds you do will make a difference in the long run? That door you opened for the person behind you, the long committee meeting you participated in, the garden you planted, the tree you trimmed? When our journey on planet earth is good and finished, after all is said and done, when the lights go out … will anyone care about any of that?

Because the answer to the question is: yes. Good deeds matter. And sometimes the agents of long forgotten tidings find their way to the surface, like spring ephemerals in the forest, and they are remembered.

Back in the first half of the twentieth century when the village was young and she was middle-aged, Evelyn would have been introduced, per the custom of the time, as Mrs. Stewart Reed Brown, wife of a Chicago attorney and Lake Bluff resident. She was also a:

Evelyn, born in 1876, doesn’t show up in any of the books on Lake Bluff history, and you won’t find a sidewalk plaque with her name on it. Lake Bluff History Museum has archived some of her notes, and newspaper reporters of the day occasionally recorded her deeds. These documents enable modern historians to create a summary of her influence.

In 1931, two years into the Great Depression, Evelyn ran against three men for two spots on the Lake Bluff Park District Board of Commissioners, which was itself quite new, having been organized in 1925 and given control of the Village’s parks in 1927-28. Perhaps voters were impressed with her experience as Lake Bluff Garden Club president from 1925-29. Perhaps women’s right to vote being less than a dozen years old worked in her favor.

At the time, Artesian Park was a garbage dump in the bed of a dried-out, man-made lake, and the park district had recently taken control of the green space east of Sheridan Road and south of the tennis courts, an effort to protect the artery into uptown Lake Bluff from being lined with “roadhouses, gas stations and other undesirable buildings.”

During Evelyn’s tenure as a commissioner, the dump was cleared and the park district added tennis courts, baseball diamonds and a field house to Artesian Park, as well as a skating rink for the winter season.

Evelyn worked especially hard to turn the park’s trash heap into a treasure. It’s quite possible you’ve rested in the shade of a tree she planted. A newspaper article after her death in 1969 reported that:

Said longtime Park District Supervisor Tom Evert in 1969: “During the Depression years, when people, town and park district had no money, she finagled, she scrounged to find resources for the park. If she bought one tree, she would talk the seller into giving us another free.”

Evelyn was especially devoted to Ravine Park and worked for decades to restore the natural flora, which had been destroyed over time by people who picked flowers for their own enjoyment, and by well-meaning homeowners who conducted burns to eradicate weeds, destroying everything else in the process.

“The only sure way to kill ragweed, poison ivy, burdock and thistle is to uproot the plants, rake them in a pile, and then light your match,” Evelyn told a Chicago Tribune reporter in June 1940.

Separately, she said that when newcomers to the Village are ready to build new homes, “members of the Garden Club, if notified, will come gladly and dig up the wildflowers and plant them elsewhere to preserve them.”

In her own garden, Evelyn preferred ornamentals, including dahlias, peonies, roses, calendula, fox glove, daisies, tulips and begonias. We know this because there’s a hand-written plant list on the back of a typed history of the parks system that she wrote and presented to the garden club in 1940.

Ravine Park, meanwhile, was meant for native plants. She and her Garden Club friends planted hundreds of small trees, shrubs and wildflowers in the ravine, including hepatics, bellflower, hawthorn, trillium, May apple, Turks Cap Lily, Dutchman’s breeches, Jack in the Pulpit, and shooting star.

Evelyn visited the ravine regularly, even when she was older and walking with the assistance of a cane.

Evelyn and her husband lived at 610 Center Avenue, a home built circa 1900 that’s still standing in 2022. It was there in 1935 that she became instrumental in re-instituting an old Village ordinance requiring outdoor cats to wear collars with bells on them so the felines couldn’t sneak up on wild birds unannounced.

Village President Elmer Vliet started enforcing the ordinance after Evelyn complained about a cat that killed a mother robin nesting near the Browns’ home. Evelyn’s protestation likely had teeth because she was so involved in the community.

Evelyn was 93 when she died in 1969. In her will she left a $1,000 bequest to Lake Bluff Park District (approximately $7,800 today) for ravine rehabilitation supervised by the Lake Bluff Garden Club.

Her presence expanded beyond conservationist and gardener. Evelyn embodied the spirit of volunteerism still so important to Lake Bluff today.

The garden is quite near the spot that in Evelyn’s day was at risk of becoming an early iteration of a strip mall. It will be lovely when the plants fill in and bees, birds and butterflies discover the bounty. Do stop by to see the wildflowers in bloom, and while you’re there give a nod to Evelyn Wilson Brown in honor of the good deeds she did for Lake Bluff’s public spaces.

And don’t leave any garbage behind. 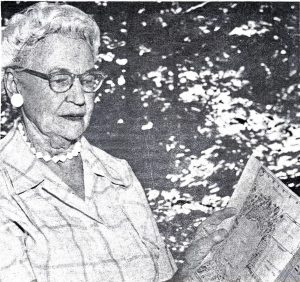 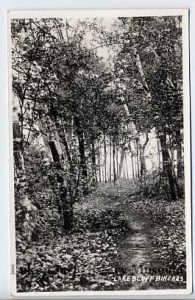 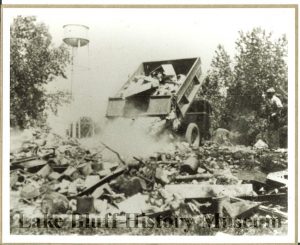 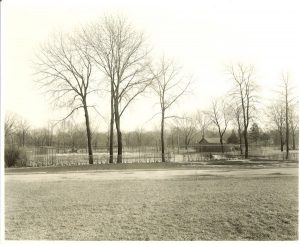