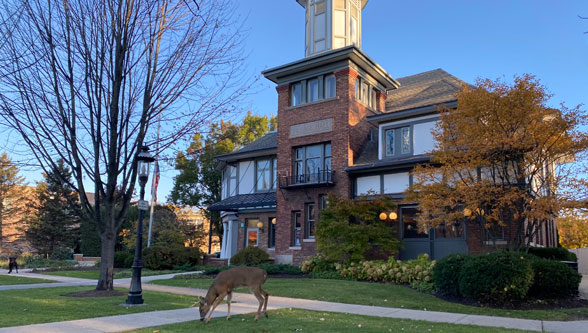 The COVID-19 pandemic forced us to slow down, and that seemed to give wildlife an opportunity to spread out. Especially during the shelter-in-place months in the spring of 2020, many Lake Bluff residents reported seeing eagles, foxes, minks, coyotes, and even the occasional wild guinea hen in various corners of the Village.

Many of these species were here in abundance when early settlers arrived in the 1830s, according to a A History of Lake Bluff: 1818-1918, a collection of essays written by seventh and eighth graders at Lake Bluff School. One essay notes that settlers encountered “wild pigeons in great flocks” but that most had disappeared by 1918.

An essay called “Hunting” recalls standoffs that settlers John and Catherine Cloes had with wild beasts in and around their homestead on what’s now Bluff Road. You have to wonder if Mrs. Cloes was even scared, though, as she seems to have been a person who could handle just about anything. In addition to managing the family’s log home and seven children, she also worked as a midwife and later went on to run a brickyard with one of her sons and their neighbor Henry Ostrander.

Here’s the story verbatim: “One night, Mrs. Cloes was assisting a sick woman about two miles from her home. In the evening they heard the howling of wolves. The farmer had a cow and young calf under a shed which was no protection, so he brought them into the one-room house. Here he tied them in one corner while in another was his sick wife and babe. He barricaded the door and one window. The wolves came howling about the house, scratched on the door and climbed up the log sides of the house onto the roof, snarling fiercely, but they failed to get in and finally went away.”

As we say today far too often about much less harrowing circumstances:“OMG!!!”

But Mrs. Cloes’ husband could actually one up her on that story. Seriously! Because he once shot and killed a panther as it was about to spring on him from the limb of a tree.

There was so much wildlife around and while most settlers carried guns, gun powder was scarce, so they used traps for hunting game. This was usually done in the evening before animals went in search of their own vittles. Trapped vermin included groundhogs, coons, possums, skunks, weasels, rabbits, beavers, wolves and foxes.

The essays written by students 103 years ago mention that the best trapping places were in the ravines and around the roots of trees in the woods. That tip probably is still good in 2021, as residents have seen mink traveling a well-worn path in a ravine.

We don’t recommend current-day Lake Bluffers go out and “fetch supper” in the ravine or on the bluff, but it worked for Mr. Cloes. In 1836, his first year here, he shot and killed a deer that was just outside the family’s log cabin. As the story goes, “he opened the door just enough to insert the barrel of his gun. They had roast venison for dinner.”

These days we have plenty of grocery stores, plus the COVID-19-era options of curbside pick up and home delivery AND all of the take-out menus at the restaurants in town. Maybe you’ll be lucky enough to shoot a photo, too. Let’s take comfort in knowing that mink, deer, coyote, fox and more are still traversing the ravines and bluffs as they did long ago.