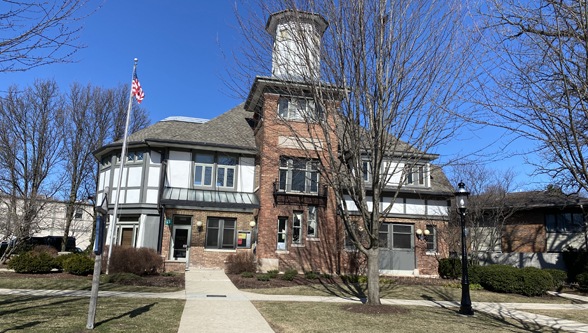 When daylight savings time arrives each spring, clocks throughout the village are pushed ahead and just about everyone over the age of, say, 8, groggily adjusts to the lost hour of sleep. But the Westminster chimes that ring from Lake Bluff Village Hall every hour from 9 a.m. to 6 p.m. to make sure everyone knows their journey on Planet Earth has cycled through another 60 minutes? The chimes are adjusted to spring forward … but the clock is not.

That’s because there is no clock in Village Hall tower, and there never has been.

This will come as no surprise to those who have lived in Lake Bluff for at least a quarter of a century, but it’s true. The chimes that ring on the hour from 40 E. Center Avenue are part of a computer-controlled electronic system the Village installed in 1995 to commemorate Lake Bluff’s Centennial celebration. That was a big year for Village Hall, which also got a reconstructed octagonal tower after going without one for decades. The original wood-and-stucco cupola was removed in the mid-1930s because it was falling apart and there wasn’t any money during the Great Depression to repair it.

“Today most people think the tower is a bell tower or clock tower, but in the beginning it served a real purpose,” says Lake Bluff Fire Chief David Graf, who headed the Centennial Tower Reconstruction Committee in 1995.

To understand the history of Village Hall and the turret that’s not a clock tower, it’s good to know the history of the original building. It was designed in 1905 by Webster Tomlinson, a business partner of Frank Lloyd Wright. Lake Bluff had been incorporated as a village for 10 years, and it needed headquarters to serve the growing community. Up to that point, Village Hall operations took place in the real estate offices of James Hobbs and Fred Cornish, first on the current Village Green and later, in the early 1900s, in a small ranch house at 502 North Avenue that was rebuilt in 2000 and is now a private home.

Tomlinson’s Village Hall cost $6,500, which was financed by surplus funds from the sale of a right-of-way for what was to become the North Shore Railroad. Village Hall originally housed the village clerk and the public works, police and fire departments all in that one building. It even had a jail. And the tower? It was equipped to pull up and dry 50-foot lengths of fire hose.

For decades after the octagonal turret was removed, the brick portion of the tower was left empty and wound up serving a new, uninvited, audience: pigeons.

Lake Bluff History Museum board member Paul Bergmann remembers climbing into the truncated tower in 1964 when he was 11 years old and his father, architect William Bergmann, supervised the remodeling of Village Hall.

“One of the things he did was repair the windows and tower area where the roof had actually caved in. This was before the wood cupola was rebuilt so I’m referring to the roof on the brick section of the tower. The roof and windows had been open long enough that a huge flock of pigeons had moved in. If you know much about pigeons, you know they can be very messy. My dad always took me to his job sites and as a little boy and I got to ‘inspect’ projects he was working on. He especially liked taking me to places he thought were cool. I got to go up in the tower to see the view of Lake Bluff from up high.

“What he didn’t tell me was that the tower area was full of pigeon poo, old feathers and rotten unhatched eggs. Once I climbed up the ladder and through the scuttle I was repulsed by the pigeon dung. I had to walk through the goo on the floor that was several inches thick. I can still remember the pungent aroma. The carpenters up there all knew me and had me look out the open windows to enjoy the view, which was cool. But the whole time I was thinking about my shoes.”

Not everyone associated the truncated tower with pigeon droppings galore, but many people wanted the blank space above Village Hall restored to its original glory. When 1995 arrived, Villagers set out to restore the tower as part of the 100-year anniversary celebration.

“Putting a tower back on Village Hall was the cornerstone of the Centennial year events,” recalls David Graf. “Before it was restored, the building looked a little funny; proportionately it didn’t look right. The brick part of the tower was lower than the roof line of the rest of the building.

“When we got the tower back on, the building looked like it was supposed to look.”