One of Lake Bluff’s finest treasures is the large mural of the French explorers Marquette and Joliet that hung in the now demolished Lake Bluff School gymnasium for 85 years. This oil-on-canvas painting, 14 feet tall and four feet wide at its base, depicts the explorers meeting with Native Americans on September 6, 1673, at the bluffs in Lake Bluff. The painting is listed as a significant Chicagoland art mural in “A Guide to Chicago Murals” by Mary Lackritz Gray.

Lake Bluff artist Marguerite Kruetzberg completed the mural in 1926, after an in-depth study of Native American customs and dress. The award-winning artist was a student of William Penhallow Henderson, studied at the Art Institute of Chicago and has additional murals displayed in Chicago public schools. Mrs. Kruetzberg was born in 1880. She and her husband built their home in an area known as Lake Bluff Artist’s Colony in 1910. She later lived in Pennsylvania, Paris, and then Tucson, Arizona. She donated the mural to the Board of Education and pupils of Lake Bluff, and was quoted as saying “A friendly gesture to all my friends, a lasting link with home.”

Remembered by thousands of Lake Bluff school children, the mural hung over the fireplace in the gym. To find a mural and fireplace in a school gymnasium was unusual: however, the gymnasium also served as the village’s community center. Prior to the school’s demolition in 2011, the mural was removed.

In 2015, the museum raised funds to restore the mural and mount it for display in the Village of Lake Bluff second floor boardroom. 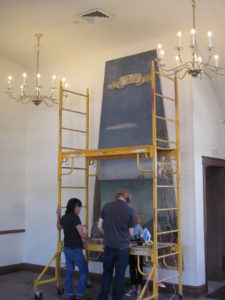 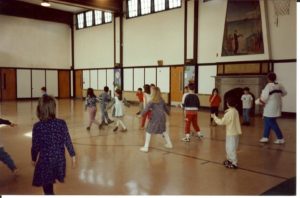