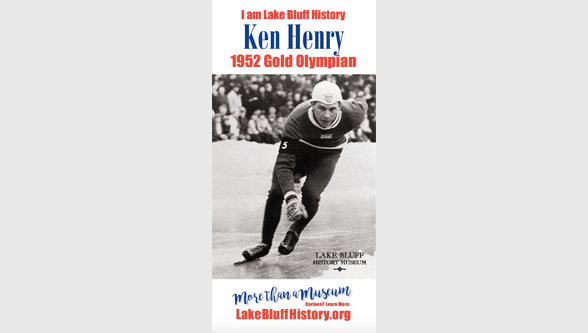 Ken Henry (1929-2009) was the first American to win an Olympic gold medal in speed skating, taking home the gold in the 1952 Games in Oslo, Norway.

Born and raised on Chicago’s far Northwest Side, Kenneth C. Henry learned to skate – and to skate well and fast – on neighborhood ice rinks operated by the Chicago Park District, which in those days flooded its parks at the start of every winter much like Lake Bluff still does today.

In 1947 and ‘48, Henry won the Chicago Tribune’s Silver Skates competition, a popular winter event on the city’s lakefront for many years. He went on to claim national titles, and he won the world title in the 500-meter race in Oslo in 1950. Two years later, Henry won Olympic gold in Oslo despite having had the flu prior to the race.

After the 1952 Games, Henry entered the U.S. Army, where he was sent to Germany and worked as a Morse code operator.

He enrolled in Northern Illinois University after his Army stint. Northern was then a teacher’s college, and he enrolled in it on the GI Bill, which provided a range of benefits such as college tuition to returning U.S. war veterans.

After graduating, he worked as a biology teacher in the Chicago Public School district, and his skating career continued. The ’52 Games were Henry’s second of three Olympic competitions, which included the 1948 and ‘56 Olympics. In 1960 he was selected to light the final torch at the Olympic Games in Squaw Valley, CA, and in the ‘60s and ‘70s he coached men’s and women’s Olympic teams, including the 1968 U.S. women’s skating team that earned three silver medals when three American women tied for second place.

In addition to excelling at skating, Henry was a strong golfer. He played on the golf team at Northern, and after teaching biology for several years he decided to pursue a career in golf, not as a pro golfer but as a golf pro. He started as an assistant pro at Park Ridge Country Club, then went to West Bend Country Club northwest of Milwaukee, and finally to Glen Flora Country Club in Waukegan, where he was head pro from 1964 until he retired 30 years later in 1994.

The Glen Flora job brought Henry to Lake Bluff, where he purchased a home on W. Hawthorne Avenue in the West Terrace, where he lived with his wife Roselle and their two sons Ken and Kirk, who attended Lake Bluff Junior High (now Lake Bluff Middle School) and Lake Forest High School.

Henry lived in the home until his death in 2009 of natural causes.