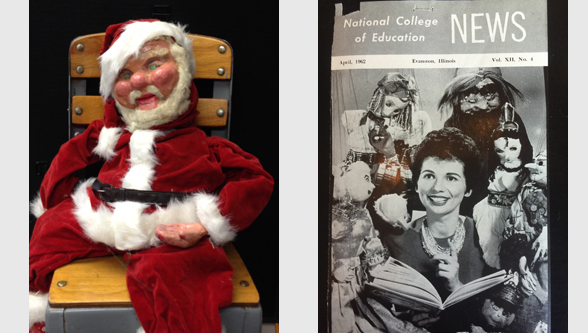 Before there was Mr. Rogers, there was Margaret Lindman, a teacher at Lake Bluff’s East Elementary School before she became a puppet master and creator of the “Just Imagine” children’s show on WTTW-TV in the 1960s. The program told stories to children using puppets that Lindman and her husband, Richard Lindman, and her sister Mary Griffith carved, painted and dressed.

The puppets were quite popular in their day, though by today’s standards they may strike some as a bit creepy-looking.

Here’s a photo of Lindman and a selection from her “Just Imagine” cast of puppets from the National College of Education News; the photo is likely from the cover of the Chicago Tribune’s TV Week in February 1962. And beside it is one of Lindman’s puppets of you-know-who, which is in the possession of the Lake Bluff History Museum.