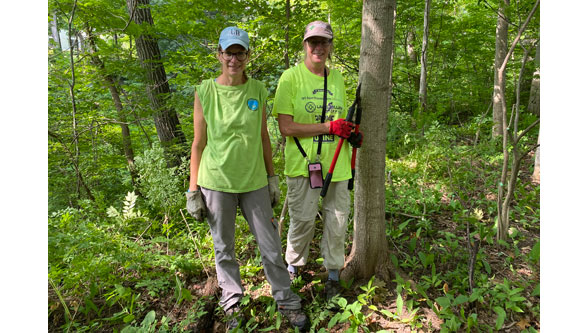 Plus ça change, plus c’est la même chose. French writer Jean-Baptiste Alphonse Karr coined this phrase in Paris in 1849, but the words could easily describe Lake Bluff at any point in its history.

This isn’t necessarily a bad thing. One of the Village’s most enduring qualities is volunteerism. Another is appreciation of our area’s natural beauty, or what Lake Bluff Camp Meeting Association founder Solomon Thatcher called “nature’s leafy temple.”

Back in the early 20th century, people expressed their love of the leafy temple and its beautiful forest-floor blossoms in different ways.

Some gave Mother Nature a boost by planting wildflowers in the ravines, including gentian, trillium, phlox, lady’s slipper, and cresses. Others loved those plants’ tender blossoms so much that they picked them to arrange in vases at home. Many of the pickers were summer visitors, and, boy, did they irk the year-rounders.

In an October 1910 edition of the Lake Bluff Chat newspaper, editor Isabelle Ross expressed her exasperation with those who were doing more than just stopping and smelling the flowers: “Do you know that our ravines are one of the few places in the Middle West which the quaint Lady-slipper will deign to choose as her natural habitat?,” she wrote. “A year ago these charming flowers were quite plentiful, and how many times did we meet sojourners within our gates who were carrying them away by the armful, perhaps only to drop half of them along the sidewalk …”

Also writing in the Chat that same month in 1910, Rebecca Farson McKay issued “A Rhapsody and a Plea for Lake Bluff Beautiful.” She implored Village leaders and residents to preserve what was already a quickly changing landscape: “Yes, Lake Bluff is indeed highly favored, and as this heritage of beauty brings responsibility of administration and advisability of preservation. So let it be hoped this green robed village will conserve its treasure places and fail not in its ‘beauty duty’ to the present and future generations.”

In 1912, Village Trustees formed a volunteer Park Commission to oversee the planting of trees and plants in public spaces. Also that year, Lake Bluff created Ravine Park in the ravine south of Prospect Avenue at Evanston Avenue east to the lake, dedicating the park to “the perpetuation of its natural beauty, and as a bird sanctuary.” There was even an ordinance forbidding the wholesale plucking of wildflowers.

But by the late 1950s, Ravine Park was in disarray. The steps, foot bridges and paths had disappeared, along with flowers and shrubs. This was largely due to neglect, as the need for more and larger recreational facilities became a focal point, according to a news article at the time. Many residents, the article states, didn’t even know Ravine Park was a park, and “they threw refuse and leaves into it, smothering the wild flowers; and set fires that ravaged the shrubs and young trees, till finally the banks became bare in many places, and with the erosion that followed, more shrubs and trees were lost.”

There were three garden clubs in the Village in the middle of the last century, Lake Bluff Garden Club, Evening Study Group, and Weeders and Seeders. Together in 1956 they set out to see what they could do to restore Ravine Park. Funding was problematic (the more things change …), so the groups decided to raise money by charging admission to that year’s Lake Bluff Flower Show and donating the proceeds to the Park District for Ravine Park restoration.

The Lake Bluff Garden Club is a vital force to this day. Notice the more than 40 seasonal containers lining uptown streets? Those plants do not emerge from their pots independent of human hands clad in gardening gloves. Garden Club members tend to them throughout the year, maintain the Blue Star Memorial at the Metra station, decorate the gazebo and downtown area for the holidays, and restore and maintain Washington Park, among other projects.

Lake Bluff Open Lands Association also has been carrying the torch passed down by early Villagers. LBOLA was created in 1981 by Carolyn Goetz to save a small wetland and white pine plantation from being developed into a housing subdivision. The effort was a success, resulting in the Lake Bluff Park District’s purchase of the land and creation of the Carolyn Goetz Wetlands Preserve. Since then, LBOLA’s mission to protect, preserve, restore and manage Lake Bluff’s open spaces and natural areas has expanded to include nearly a dozen prairies, wetlands, woods and ravines.