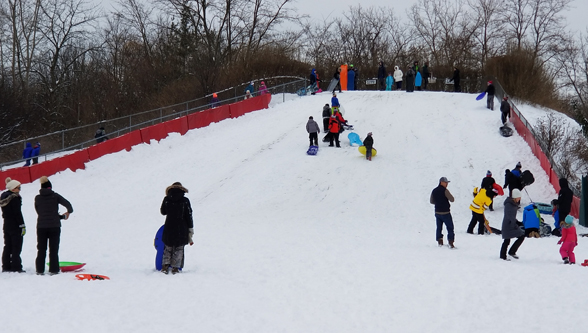 Sledding is one of the best things about winter in prairie-flat Lake Bluff. For decades before the Park District sledding hill was built in 1994, kids would sled in the ravines, on beach road, and on Lillian Dells Drive. None of these locations is ideal: sleds can heavily damage fragile ravines, for one thing. For another, there’s a massive body of water that might or might not be frozen just over the beach road.

Another popular sledding location was just east of Green Bay Road and Route 176. Today it’s the North Shore Bike Path, but prior to 1994 it was a smooth, grassy hill maintained by the Village Public Works Department.

And when it snowed? Ownership of that hill defaulted to children with their toboggans, saucers and sleds.

Sledding on the Green Bay Road hill ended in 1994 when the Lake County Division of Transportation built a bike path and tunnel there. The mere proposal of the tunnel put villagers in a very dark mood, so to speak. Many were concerned it would be a public safety hazard attracting graffiti artists, muggers and worse.

“Oh boy, was that controversial,” remembers George Russell, who was Village Engineer at the time. “Lots of people in the Village felt a tunnel under Green Bay Road would become a crime location. It was so controversial that they had to move the hearings from Village Hall to the middle school gym to accommodate everyone.”

Pressed by the community, Village Trustees yo-yo’d on what to do. At first they voted 3-2 in favor of the tunnel on November 8, 1993. But after several hundred people signed petitions of protestation, the board later revoked its approval “in order to best protect the health, safety and welfare of the Village”. (You can read about it in this PDF of Resolution 94_14).

You all know how this ends, right? Because there’s a tunnel under Green Bay Road and it’s been there for years. What happened was negotiations between the County and Village continued behind the scenes, and in May 1994 the Village proposed a compromise that placed lockable security gates at both ends of the tunnel, enabling Lake Bluff police officers to lock the tunnel from dusk till dawn.

Cyclists were delighted; children not so much.

“The families lost their spot to sled when the tunnel was built,” remembers Russell, whose sons were then just little kids. “I was wracking my brain as a resident and as Village Engineer to find a spot where we could build a hill.”

At the time, contractors were doing a lot of water main projects, digging dirt out of the streets and hauling it away. Regulations were making it more difficult for contractors to find places to dump the dirt, which got Russell thinking about an alternative solution: Why not keep the dirt and put it to good use?

He approached the Park District board with a proposal to have a sledding hill constructed in an under-utilized field just east of the outdoor swimming pool at Blair Park. It was a win-win for contractors and tax payers alike, because the dirt, labor and equipment to haul and shape the hill were all free to the Park District. The board approved the plan with ease, and then provided
expenses to have lights added, steps built and a fence installed on the side of the hill.

Contractors got a place to dump their dirt, and generations of Lake Bluff children got a much bigger and safer place to sled.

Oh, and the tunnel? Police officers haven’t locked it in years.