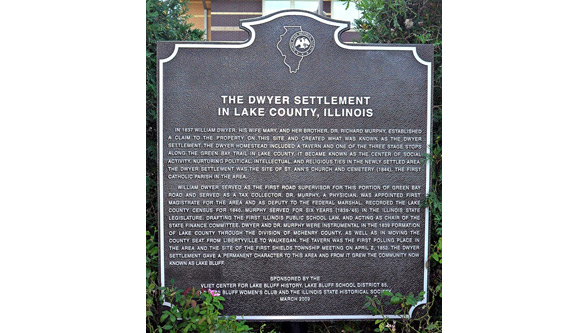 Did you know that the go-to place in the earliest days of Lake Bluff was an Irish pub?

The Dwyer tavern was owned by William and Mary Dwyer and Mary’s brother Dr. Richard Murphy, well-educated emigrants who left Ireland in 1820. They were the second family to lay claim to land in the area now known as Lake Bluff, in 1837, after spending time in New York and Canada.

The Dwyer homestead was just north of West Washington, where Lake Bluff Elementary School is today. It was one of 11 stagecoach stops on the Green Bay Post Road, a rough trail created by native Americans and early explorers along a glacial ridge that was a high point and remained passable in wet weather. In 1836, a U.S. Congressional Act designated Green Bay Road a new postal route, and the trail was used to deliver mail and military supplies.

Dwyer tavern was the most influential stop along the trail in what’s now Lake County, according to Elmer Vliet’s book “Lake Bluff: The First 100 Years.” When travelers stopped at the tavern, it was often for a drink (brandy, gin and rum cost 12.5 cents for half a pint), but also to feed and stable horses, repair equipment, share a meal at common tables, and rest in dormitory-style bunks. When township government was formed, the vote took place at Dwyer tavern. The book “A History of Lake County” by John Halsey describes the Dwyer stop as being “long famous as a relay tavern” and “the center of intellectual and social influence.” It was the place to exchange news with fellow travelers as well as with the proprietors themselves, according to “The Dwyer Settlement” by Pam Russell.

The tavern was so significant that the entire area surrounding it became known as the Dwyer Settlement as the community grew to include St. Anne’s Catholic church and cemetery, plus farms, cabins, and other businesses. The Dwyers and Dr. Murphy became community leaders.

The Dwyers and Murphys were not the only settlers from Ireland. As Vliet wrote: “Lured by work on the canals, beginning with the Erie in 1817 and later the Illinois and Michigan in 1836, scores of Irishmen poured into the country. Many saved their money and bought farms, a significant number around the Dwyer tavern and farther south into west Lake Forest.” Others Irish pioneers included Michael Dulanty, Michael McGuire, Michael Mines, Dominick Moran, and James and Nancy Cole. Shields Township is named for Gen. James Shields, a hero of the Mexican-American War of 1846-48, and later a U.S. senator and friend and colleague of Dr. Murphy.

Sláinte to the Irish pioneers of Lake Bluff!